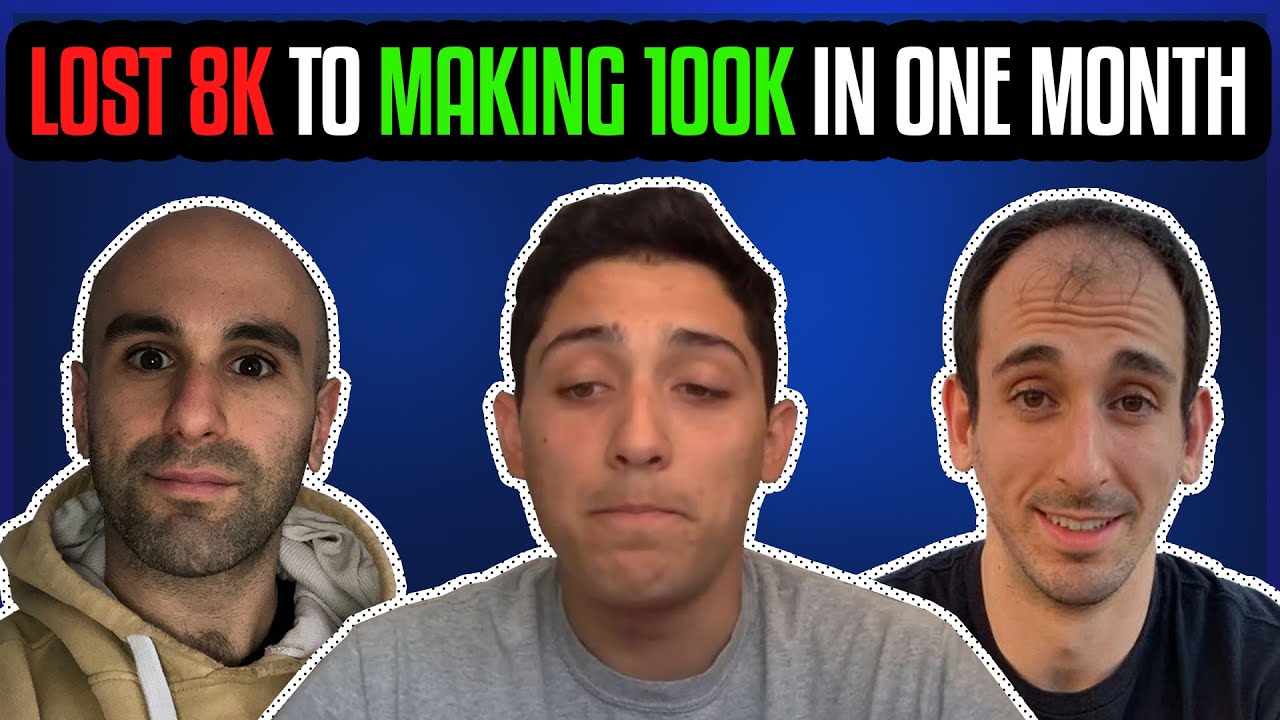 Disclosure: This post may contain affiliate links. This means we would make a small commission on some of the mention products at no cost to you! This helps us keep the lights on and produce helpful content.

Success isn’t always straightforward. Even the best of us make mistakes.

Some of us start off in unprofitable business models that have us losing money or just barely breaking even. Others pour money into advertising campaigns that effectively go nowhere. Still others give up before they can even really begin, overwhelmed by the uncertainty.

We’re going to share with you a modern-day failure and success story, not unlike rags-to-riches fairytales. This is a completely true dropshipping failure story that one of our first students, Mike, experienced himself.

He learned a lot of lessons along the way, and we hope that by sharing his story with you, you’ll learn some of these lessons, too.

Don’t want to read? Just click the thumbnail below to listen to us talk about it instead.

About Mike: The Beginning

Mike was one of our first students – one of our “pilot students,” as we call them because he was one of the first people to test our course. We let him into our course before we had even officially published yet. However, his story began well before he met us and started taking our course.

He had started dropshipping before he met us, and it wasn’t going very well for him. He initially started off eBay dropshipping, only to have issues with Paypal and his accounts, so he tried Aliexpress next. We’ve got another story about how horrible eBay dropshipping is here.

His days were spent searching for unique products on Aliexpress, and then filming himself with them, writing his own copy, and posting his advertisements. He attempted to advertise his gadgets on Facebook, but that backfired on him, too.

Instead of getting charged per click like with Google Ads, he was charged simply to show his products to people. Because of this, just breaking even was a success for him. After all, at least it meant he wasn’t in the hole.

Since all else had failed so far, he desperately turned to hiring a coach and taking a course for a few thousand dollars. This coach said they were an expert and had been dropshipping for a decade, so Mike naturally thought he could do the same thing if only he had some advice.

Unfortunately, there’s only so much you can do with Aliexpress dropshipping, so even with coaching, he didn’t get anywhere…other than $8-9K in the red.

Read Also: Dropshipping Mentor: Do You Need One for E-Commerce Success?

Is It Possible to Achieve Success in Mike’s Previous Business Models?

We’ve talked about how we hate the Aliexpress dropshipping business model before. But is it possible to have success in it, or was Mike’s coach effectively scamming him? Was Mike an outlier, or is it just uncommon for people to do it successfully?

Obviously, the coach had some degree of success on their own. They had screenshots to show him, otherwise he wouldn’t have bought into it. But when Mike reached out to a few of his other classmates in the course, he discovered an unsettling trend.

Most of them were experiencing the same problems he was. They may have been making some sales, but they certainly weren’t profitable. This was a giant red flag for him, but it was far from the only red flag.

One day, one of Mike’s fellow students in the program ran into one of the coaches at his college. The student asked the coach if they’d even done Aliexpress dropshipping before, and the coach admitted they hadn’t. They were just given the material to teach to prospective students.

Suddenly, Mike saw a whole theme park full of red flags. He knew something had to change. He couldn’t keep gambling with his career like that.

That was when he discovered Build Assets Online and the lessons we had to teach him.

The Strategy We Teach

If this is the first article of ours that you’ve read, allow us to explain the main business model we teach.

Instead of dropshipping cheap Aliexpress items, we teach high-ticket dropshipping, which means you sell expensive items. We combine our high-ticket stores with search engine traffic through Google ads. Our advertisement strategy is mostly “query-based marketing,” which means our ads appear before people who are searching for the products we are selling.

Unlike with Facebook ads, which interrupt someone scrolling in their feed, our ads show up only for people who are expressing interest in our products. Because of that, we don’t have to work as hard to make sales.

Best of all, because the items we are selling are typically $500 or over, we make a larger margin of profit on every single one. We don’t need to sell as many items to make money. In fact, with just a handful of sales monthly, you can recuperate your losses and then some.We have a more detailed discussion on why we avoid low-ticket and cheap items right here.

Read Also: Dropshipping Profit Margin: What We Make on a $10K Sale

Mike’s Experience with Our Course

As we mentioned before, Mike went from failing in Aliexpress dropshipping to finding our course. Because he was our pilot student, we didn’t charge him up-front for it. Instead, we asked for a 10% consulting fee from his profits.

Then he sat down and went through our course from start to finish. It was when he got to our discussion on advertising that he was really struck with the gravity of the mistakes he’d made before.

Mike remembered all the crazy strategies he had to use just to get someone’s attention on Facebook, like ad copy littered with emojis and over-the-top openings to his videos. He realized that none of that really made sense, especially when you consider that huge brands like Wayfair don’t do the same thing.

Continuing to advertise like that on Facebook was like playing a lottery. There was an incredibly slim chance for success, as opposed to advertising effectively on Google.

After completing our course, Mike started his own high-ticket dropshipping store in June of 2019. From the get-go, he noticed how different it was from drophsipping on Aliexpress using Facebook ads.

Instead of spending hours a day trying to make new and exciting ads for Facebook, he would spend maybe twenty minutes daily checking his Google ads. He found out that even if you weren’t an advertising expert, you could still make a few high-ticket item sales.

And that was all it took – just a few sales. On his first sale, he made around $900 in profit, so if he made a few mistakes here and there, he still had some wiggle room. As soon as he was making money, he could go back and make tweaks to his strategy.

After a few months had passed, he woke up one day to find that he’d met a huge milestone: $100k in sales for the month. Unfortunately, one of the customers had to cancel an order, which put him back down to around $98k, but he still hit that milestone.

With high-ticket items, he didn’t even need to make sales every day of the month to reach that point.

Now that Mike is on the right path, where does he go from here? Maybe we’re tooting our own horn a bit now, but we think his future looks brilliant.

At this point in time, he’s looking at outsourcing a little of his work and hiring an employee to help him with customer service. Once his dropshipping store is automated, he’s got his sights set on expanding into other business models. His exact words to us were, “It’s not Build Asset Online, it’s Build Assets Online.”

He’s thinking about building his own YouTube presence or even investing in someone else’s business to help them reach their own success. As far as YouTube goes, he’s working on a video game channel where he hires content creators to do voiceovers for various videos.

His hope is that, with enough viewers, YouTube will put ads on their videos. We personally think this strategy would work best combined with an eCommerce site.

You could think of what types of products you’re selling, and then what kind of videos would highlight those products. If someone finds and watches your video, they might want to buy your products.

Depending on the kind of channel you have, YouTube ad revenue can be a little on the low side, so we believe it would work best paired with another eCommerce business model. It could be a little risky, though, because YouTube ranks videos higher if they’ve been watched entirely, so putting a link in the description could be a problem if someone clicks on it before finishing the video.

However, even if it fails, he’ll come out of it with the skills to make YouTube content. We talk about his options in even greater detail in the video at the top of this article.

We hope, more than anything, that Mike’s story helps you realize that success isn’t impossible. Even if you’re thousands of dollars in the hole, you can turn it around with some work, patience, and knowledge.

Don’t let yourself be fooled by flashy trends and business models. Remember that old adage: if it seems too good to be true, it probably is.

We’ve been there and done that when it comes to risky business models like Aliexpress dropshipping, too. That’s why we’re able to say definitively that high-ticket dropshipping works the most consistently. We have years of experience in it, and we’re completely confident when we say it’s our favorite business model.

If you’d like to read more about our own online portfolio and how to build one like it, you can read our free Online Assets Playbook. When you finish that, consider taking our Instant eCommerce Assets course to build your knowledge even further.

Grab our free course: Online Asset Playbook
It’s our Secret Formula For Creating $1,000,000+ in Assets from Home, even if you have no prior experience.

Scroll back to top

YES, SEND ME THE FREE COURSE!
NO, I DON'T LIKE FREE STUFF.
x